SFC extends an official warm welcome to three seniors from Loyola High School who will be volunteering for the month of January!

Every year, Loyola H.S. seniors spend the first month of the year volunteering at nonprofits as a part of their senior service project. SFC has been a proud host of students for many years in a row now.

Join us in welcoming our three volunteers from Loyola, Charlie, Gabriel, and Patrick! 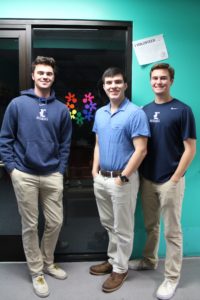 Gabriel decided to work at SFC, because he wanted to work with the low-income and homeless population of Los Angeles. He also enjoys the small community feeling present at SFC. After the month of January, Gabriel hopes to come back to SFC and volunteer. He is passionate about theater, and is a part of Loyola’s theater crew!

Patrick found out about SFC when he was participating in a community service trip, and decided to come back because he wanted to give back to the community. His favorite part about working at the center is meeting the different guests that stop by SFC, especially during breakfast. Like Charlie, Patrick likes to play baseball (he is part of Loyola’s team!) and listen to music.